Is the Devil more trustworthy than a record executive?

Young guitar virtuoso Clarice Marnier is on the verge of success when she crosses the wrong A&​R man. Suddenly, instead of being signed to the major label, she finds herself blacklisted. So Clarice makes a deal with the Devil: the soul of her enemy for a record deal and a second chance.

As Clarice and her band, Bloody Waters, begin their ascent to rock stardom they are beset by a strange array of enemies. Has-been guitar heroes, popstar succubi, spell-slinging DJs, angry divas and killer angels – every occult freak and music industry player in LA wants something from them, whether it’s a slice of their fame or a bite of their souls.

Clearly there’s more at stake than just a record deal – but what does the Devil really want, and how far will Clarice go to protect what’s hers?

“A great book, superbly written… one of those things you can call truly different.”

— Narrelle Harris, author of The Opposite of Life 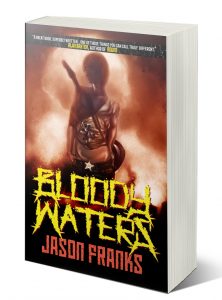